House members voted on House Bill 1033XX on Feb. 12. The legislation was the main revenue portion of the ‘Step Up Oklahoma’ plan and included tax increases on tobacco products, motor fuel, the wind industry and the gross production tax. Lawmakers voted 63-35, and the bill failed to receive the 75 percent approval necessary for revenue-raising measures.

In light of the ‘Step Up’ vote tally, House and Senate JCAB approved House Bill 1020XX on Feb. 15. The bill enacts 0.67 percent cuts to all agencies for the remainder of FY18.

The governor on Thursday amended her call for the second special session of 2017 to recommend the following:

OKLAHOMA CITY – A bill enabling the State Election Board to cross-check Oklahoma’s voter database with other state or federal citizenship databases cleared a House committee today with a vote of 4-2.

House Bill 3341 by state Rep. Sean Roberts gives the secretary of the State Election Board authority to conduct data validation of voter registries. Individuals who are identified as potentially being noncitizens and who are registered to vote will be reported to the district attorney for the county in which the voter is registered.  The Election Board will not remove anyone from voter registration lists.

The secretary of the State Election Board will conduct data validation every two years and report the findings to the governor, president pro tempore of the Oklahoma State Senate and the speaker of the House.

House Bill 3341 now moves to the House floor for consideration.

During a recent meeting for the House Special Investigative Committee, Cleveland asked Dutton who gave the executive director permission to terminate the auditor. Dutton told the committee Tourism & Recreation commissioners gave Dutton permission during a board meeting’s executive session in April 2017. Minutes from the meeting, however, show “no action” was taken during executive session.

Oklahoma’s Open Meetings Act requires public bodies such as the Tourism Commission to identify the items of business and purposes of executive sessions as well as any general business to be transacted in the meeting. Violations of the Open Meetings Act are considered a misdemeanor and are punishable by a fine not exceeding $500.

Ritze Calls for Judge to Step Down

House Resolution 1025, a non-binding resolution, would ask the Oklahoma Court on the Judiciary to begin removal proceedings for the Sulphur judge after he accepted a plea agreement for Benjamin Petty. Petty, who admitted to raping a 13-year-old Texas girl while he was serving as a cook at Falls Creek church camp, received just 15 years of probation under the plea deal.

Matthews noted that high speed rail is currently being developed in Texas, and could be coming to the borders of Oklahoma.  A commission is needed to study the feasibility and major benefits of rapidly transporting workers and tourists to cities throughout the state.

During debate, he pointed to examples like Seattle, Washington and major airports where people experience the benefits of light rail transport and are moved from place to place with relative ease.  Light rail is a fun way for passengers to move around a city and helps cut down on pollution, traffic jams and drivers’ stress about inattentive drivers and parking.

The bills will now move to the full Senate Appropriations Committee for further consideration.

The Oklahoma Senate on Tuesday will hold the first of a series of hearings to further review the budgets of the top appropriated state agencies.

Schulz said typically, agency budget hearings are held by appropriations subcommittees during the interim. Bringing agencies back to the Capitol during the legislative session for a hearing in front of the full Senate Appropriations Committee will give all senators and the public an opportunity to learn more about agency budgeting and spending practices, he said.

The hearings will be held in Room 535 of the Oklahoma Capitol. The hearing schedule (subject to change, if necessary) is as follows:

OKLAHOMA CITY – Governor Mary Fallin today extended and expanded a burn ban to include 52 counties because of extreme and extraordinary fire danger.

County commissioner-issued burn bans remain in effect for several counties.  This list is frequently updated by county commissioners. For the most updated list, visit www.forestry.ok.gov/burn-ban-info.

Oklahoma Forestry Services (OFS) recommended the ban based upon an ongoing analysis of fire activity, wildland fuel conditions, and the predicted continued drought.

The governor reminds people to be extremely careful with any outdoor activities that might spark a blaze.

Unlawful activities under the ban include campfires, bonfires, and setting fire to any forest, grass, woods, wildlands or marshes, as well as igniting fireworks, burning trash or other materials outdoors.

LPG and natural gas grills and charcoal-fired cooking outside in a grilling receptacle are permitted, provided the activity is conducted over a non-flammable surface and at least 5 feet from flammable vegetation, but any fire resulting from grilling or use of one of the cookers or stoves is still considered an illegal fire.

As part of the governor’s burn ban, there are exemptions for many items, such as welding and road construction. For more specific information and details, visit www.forestry.ok.gov/burn-ban-info or call Michelle Finch-Walker with the Oklahoma Forestry Services at (580) 236-1021.

OKLAHOMA CITY – Governor Mary Fallin today issued the following statement following the resignation of Preston Doerflinger as interim commissioner of the Oklahoma State Department of Health and as Cabinet secretary of finance, administration and information technology.

“The board of the Oklahoma State Department of Health has accepted the resignation of Preston Doerflinger as interim commissioner. He has also resigned as secretary of finance, administration and information technology.

“Preston has played a critical role in state government, serving as director of the Office of Management and Enterprise Services, and Cabinet secretary of finance, administration and information technology. During the past seven years, his efforts saved tax dollars by implementing cost-saving reforms and consolidating state agencies. He also helped guide the Department of Human Services during a critical time when key reforms, such as the Pinnacle Plan, were implemented. I appreciate his service to the state.

“I was unaware of the personal situation involving Preston and his ex-wife almost six years ago. Mrs. Doerflinger did not contact my office about this matter. I take domestic violence very seriously, but I will take Mrs. Doerflinger at her word that this matter was not a case of domestic violence. I respect Preston’s decision to move on from his government service, and wish him and his family the best.” 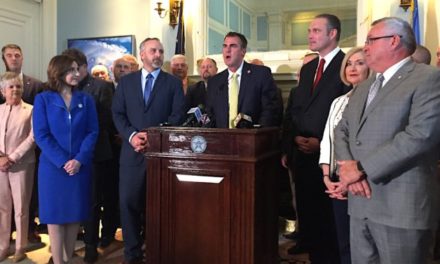